In the previous post, a Raspberry Pi Zero was modified to capture hashes (or rather NTLMv2 responses from the client).

Let’s see how hashcat can be used to crack these responses to obtain the user password. I will be using dictionary based cracking for this exercise on a Windows system.

Download the latest version of hashcat binaries from here - v3.10 at the time of writing.

Unzip the 7z file and open a command prompt at the unzipped location.

For convenience, I have created two directories in the hashcat folder:

hashes - to store the responses that need to be cracked

cracked - to store the cracked passwords

The client response captured by Responder was:

MANGO is my domain name and neo is the user who was logged into the system.

I saved the response into a text file named hash.txt in the hashes folder created earlier.

The hashcat developers have done a wonderful job in simplifying the cracking process. All you need is a fast cracking machine and patience. :)

Since this is a dictionary based cracking, there are two scenarios here:

I wanted to show both scenarios here, starting with the worst case - not having the password in the list.

Open a command prompt at the extracted hashcat folder. For NTLMv2 cracking, the hashcat can be run as,

If you don’t specify -o switch, the password (if cracked) will be stored in hashcat.pot file in the hashcat folder.

If the password is not found, this is what you see once hashcat completes the cracking. 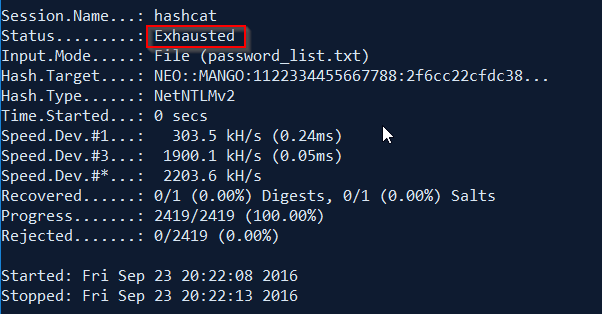 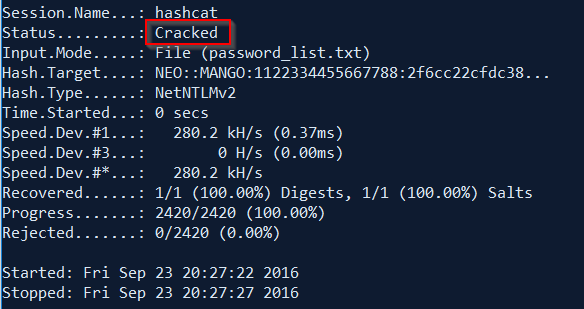 To view the cracked password, see the cracked.txt file in the folder named cracked.