Question - In a controlled corporate environment with DLP solutions monitoring the HTTP and Email traffic, how would you perform data exfiltration during a Red Team Pentest ?

‘One’ of the answers would be to use social networking sites, let’s look at Facebook in this post. 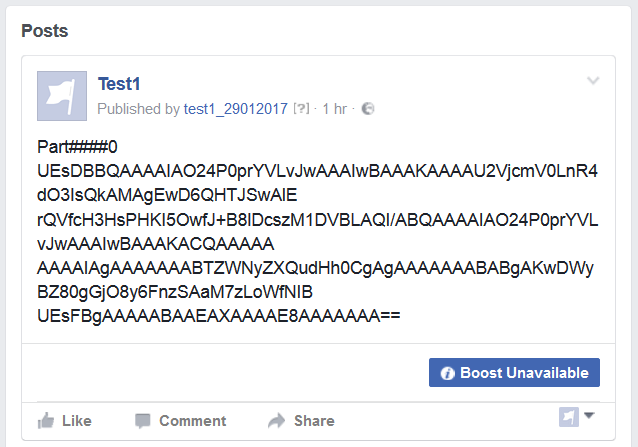 Data exfiltration using Facebook (FB) and the like is nothing new. There has been various instances where these networks have been used as C&C, data receivers etc..

Why are social networking sites a good option - one major reason is that they are loosely controlled (not blocked in many organizations - is LinkedIn blocked at your workplace?)

FB allows 63,206 characters in a single post, which is quite cool. So can we use that as a receiver, i.e, post data to a FB post from a corporate environment and then retrieve it from outside??

Ok, as some of you are already thinking - that would mean giving up the data to Facebook. Solution - Use Encryption - encrypt the data using AES or similar and then post to FB. (Maybe?)

Surely you don’t want to login to your personal Facebook to paste data to your wall (!). Let’s use Facebook APIs.

Now, I would assume that it is not always ASCII data that we would want to send out. E.g. Zip archives, image files or anything for that reason. So what do you do?

The approach I took is as below:

Read the file in binary mode –> Do a base-64 encoding of the binary data which gives the ascii version –> split them up as necessary and post to FB using API from inside the corporate network –> Retrieve the data from the (multiple) FB posts from outside and combine them –> do the base-64 decoding –> write the output in binary mode to file –> BINGO !!

Now, one thing you can also do is to Unpublish the Page / control the viewing to which you are making the post. That way, it will ensure that only the Page owner can view the posted data.

I would like to present the usage through a Red team exercise scenario where the task is to perform exfiltration of a sample file (of the order a few KBs magnitude). There is nothing to prevent the same method from being used to send out a large file; for the sake of the PoC, I will keep it simple. :)

The base for the Python scripts have been adopted from link 1 and link 2. All credits to the original work for making this simple.

This also goes to demonstrate how Facebook APIs can be exploited for malicious purposes, e.g. a malware with API tokens that can post to a Facebook page / wall maintained by the bad guy.